I have no idea what took me so long, but I finally finished Beatrix. After finishing the testing I suppose I just got busy with other things. If you folks are like me, you are trying to find things to keep the cabin fever away. I can tat only for so long and I want to do something else. But I did stick with it and now it is done. 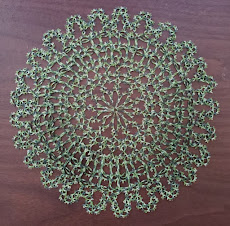 If you look closely you will find the mistakes. There are 2. One was done accidentally and the second was by intent so as not to have to redo half of a round. It just "fixed" the error. Without the "fix" the counts would not have come out right. I don't think most people will see it because it is a busy pattern and you probably just won't notice it without looking for it. It still looks good.

The next thing I have from Tat Days is an ear-saver. In our goodie bags were small plastic baggies with some #3 Lizbeth, some buttons and some pearl beads. Put them together according to instructions and this is what you come up with. It does keep the pressure from the mask elastics off your ears.

This pattern was very kindly provided by Vicki Clarke. It is not hard to do at all. If you want the pattern, she put it on her blog under the heading "I Wish I Was At Palmetto Tat Days 2020." Don't know where her blog is? Look here: https://victats.blogspot.com/.

Size 3 makes the right size ear saver. I don't think I would do it in King Tut, though I could if I make it a LOT longer. It probably would not be nearly as comfortable, though.

I finally started looking through the Tat Days CD. While I was in Toccoa I saw people making these little covers for a small retractable key ring. I looked in my goodie bag and there was one of the key rings. On the CD I found the pattern that they were using to make the cover. This morning I took an hour and made mine. It is really a modified ice drop type of pattern.

My spring cover on the ring is a dark gray so I wanted something that would stand out. I was going to use Lizbeth color #100, but then found that I need size 10, not size 20, which is all I have color #100 in. I checked the very limited supply of size 10 and #677 is all I had that I liked for this. Green is my favorite color. I like it.

The pattern was adapted by Diane Daiker from the Flower City Tatters in Rochester, NY. Thanks, Diane!!

It's over. Tat Days 2020 is history. But, man, was it a blast! This has been a successful several days for me. First, I now have a road tested car that previously had only been out of town once. Performed like a charm. Second, I learned something in every class I took. Third, there is nothing like seeing old friends. And young ones too. Haha. 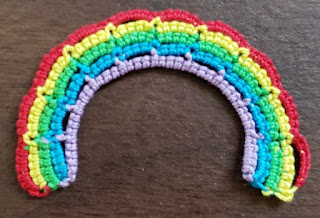 This is the first piece from a class I have finished. It is Martha Ess's block tatted rainbow. It used encapsulation to hide ends. I haven't done that before so it was really of interest. If you know me, then you know I really like finding new techniques and this one was pretty cool. I was able to finish this in class by staying "after the bell" an extra 10 minutes. We had an hour until the next class anyway. I think it turned out pretty well.

I will talk more about Tat Days in a few days. I want to finish all my projects, so I have at least 3 more posts coming, but first I have to tat them. Please stand by!

By now most of you know that I like tatting with King Tut thread. I buy the spools, not the cones, though it may be cheaper in the long run. I do use a lot of it off of a 500 yard spool. One of the things I try to avoid, like all of us, is twist in the thread. I got the idea that if I would take the thread off the way it was put on, that is, unwind the spool instead of just pulling it from the end, then the twist would be a lot less. And it is. The problem is keeping control of the thread. 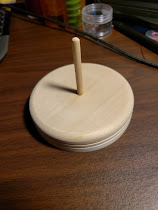 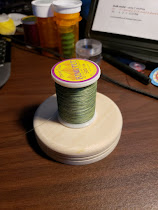 Here is my solution so far. I used a 4" piece of 1"x4" white board and turned it to a 3" circle. I added a couple of grooves for decoration and to make it easier to pick up. Then I drilled a 3/16" hole in the center and inserted (glued) a 2 1/2" long piece of 3/16" dowel that I found at WalMart in the craft department. I think that should be enough information if you want to make one. Oh, 1x4 is actually 3/4 thick, not 1. It's just called that.
You need a lathe to do the round, or you could use a scroll saw or band saw and sand it. You could use a router for the groove if you want. Also use a router for the rounded edge on top. It is heavy enough that when I pull thread from the spool it lets the spool turn without scooting across the table.
Posted by Tim Kaylor at 10:48 AM 3 comments:

A Comedy Of Errors

I finally got the 5th round done on Beatrix. You've seen that before. I was test tatting it for Jane Eborall. I got the testing done  but I still want to finish the doily. Right now it is about 6 1/2" across. Of course I am using King Tut thread. One more round to go. The color is a variegated green, King Tut # 988, Oasis. 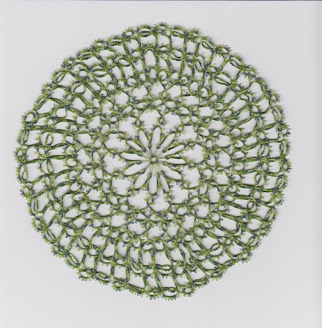 Finishing this round was, as the title of the post says, a comedy of errors. I got to the end and found I had joined the last outer join to the wrong picot, one on the inside. That meant that if I went ahead and connected the last chain, then it would cross and twist and make a right mess. I got a little irritated and cut it from the ball and shuttle with an extra foot of thread on each, then put it down over night. This morning I picked it up to fix it.Since the place it joined was all chain, it was simple to undo, just pulling the core thread back out. Where the thread was really kinked I smoothed it with a fingernail.

Next I pinched the core thread in a Pop-A-Bobbin shuttle with no bobbin, just letting the pin lock it. That was easier than finger tatting this much. I recreated the chains and about halfway realized I had the thread coming out the wrong side of the shuttle. OK. Deal with it. I got to the end again and it still didn't look right. I was supposed to have 4-4. I didn't. I had used the wrong chain counts. There are two alternating counts. I had to undo that again and finally tat the correct chains. Now it is done. The extra thread I had left just guaranteed that I had enough to work with. Once it was sewn it, it came out pretty good. On to the next and final round! I wonder, how I can mess up that one?

You know, lately, our mail has gotten worse and worse. When I moved here 15 years ago it came at about 10 a.m. A few years later it got to 11 a.m., then 2 p.m., then 5 pm. In recent months it has come at 6 and 7. Once they even skipped delivering on this street. I know. I was watching. Last evening I checked the mail at 6:45. Nothing. And I know there was supposed to be at least one letter. I do use informed delivery and it shows what is in the mail. I went to bed about 7:30. I don't know what time it arrived. 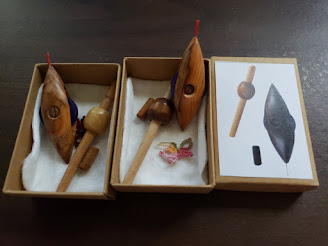 I got up this morning and went to get the paper at about 5 a.m. It was in the box, as usual. I reached into the mailbox to see if anything was delivered at all. The letter was there. And something I was not expecting just yet. I got 2 new shuttles! Pop-A-Bobbin, of course. If you have seen the Tat's Heaven blog you know that they got hold of some yew wood. That made the mail worth the wait. I am glad I thought to check it. Aren't they beautiful?

I have to get some thread on them and play. See ya later!

Tim Kaylor
I have been tatting since about 1972. I also knit and crochet. I prefer to tat. 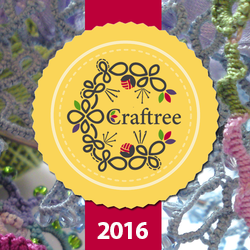